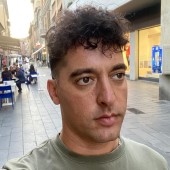 My name is Gianluca Casati.
I am an Italian mathematician working as freelance full stack developer.
I ❤ coding and open source!
I feel a strong passion for mathematics.
I enjoy playing 🎶 guitar and percussions.

I joined many social networks, and I have a profile on many sites. I like to increase my online presence.

Yes, I have a Facebook profile that let me met again my friends in Chile after 15 years (thank you, Andrès Hernaiz, to find me on the Internet).

I also have Twitter: though I do not use it often, so far.

I was addicted to Hacker News and right now I have exaclty 666 karma points at the time of this writing, on my HN profile.

Talking of my addictions, I joined GitHub (thanks to the mythic Ingy döt Net), and I put there almost all the code I write, including this site which is also hosted on GitHub Pages. I am convinced that GitHub behaviour and ethic is the key for the evolution of mankind in this new millenium. Thank you GitHub!

My nick on GitHub is fibo that stands for Leonardo Pisano (a.k.a. Fibonacci, the son of Bonacci), which was the main mathematician of the middle age.

Fibonacci is famous for its sequence, but, he didn't really care about it: it was just one of the many excercises in its book Liber Abaci. There are many math formulas waiting to be discovered or rediscovered, think about Euler for example: most of the works written by the most prolific mathematician are still unpublished, just waiting. I really enjoy keep studying mathematics and implement it with a programming language, for example I produced a vvvv contribution that let artists play with Chaos Theory formulas: it is called Chaos Toys. I really like vvvv as an environment to play with mathematics, and it is very exciting for me thinking about artists that experiment with math formulas I implemented with vvvv. It is a fun way of doing math research, to free the formulas from the books and release them in some artistic installation that can push forward its conception to a level that even the original author could not imagine. This is my vvvv profile page. I am glad that vvvv users call me fibo on line and on site.

This is my Linkedin profile, and I would like to share also a nice story about Linkedin. As an experiment, I created the vvvv users group hoping it can help hiring vvvv developers. The group was created just after node13 event, on November 2013 and at the time of this writing has more than 200 users.

I joined many sites on Stack Exchange network, for instance this is my StackOverflow profile.